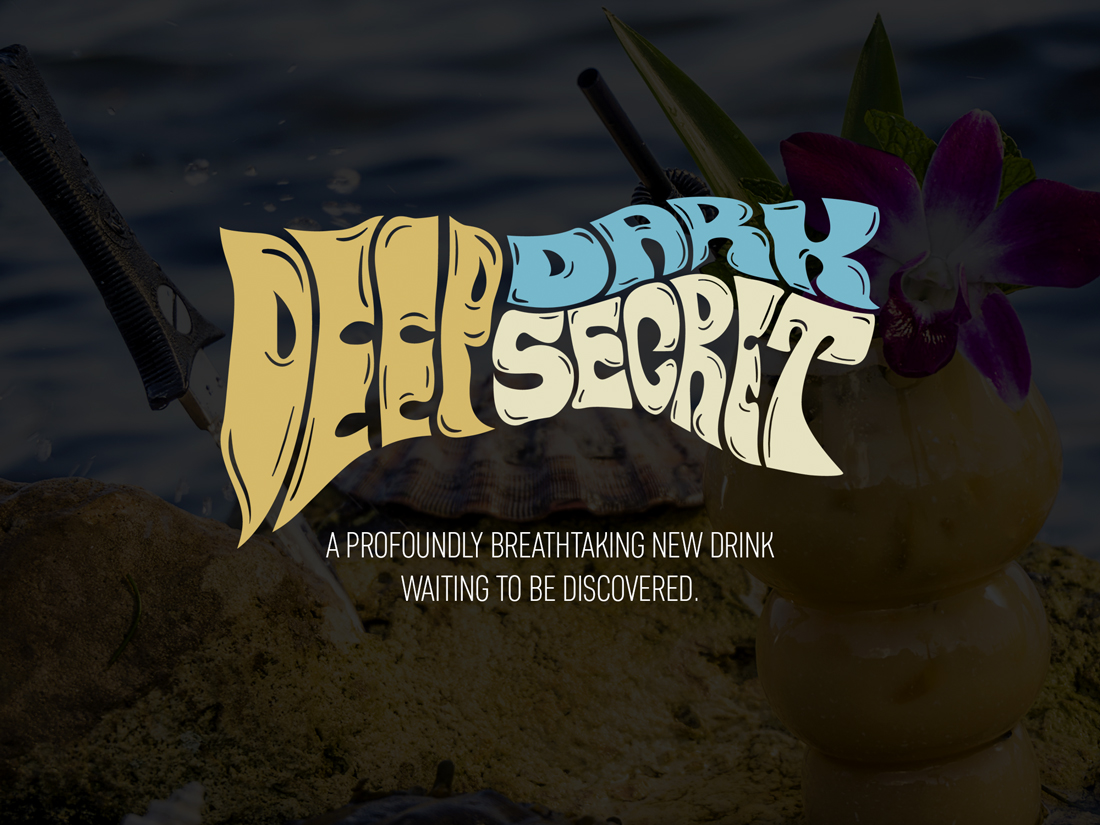 “Far away from the islands, deep in the depths of the Pacific, lurks this mysterious combination of deadly yet delicious rums, rich tropical juices and lusciously spiced syrups. Many a mariner have been declared lost at sea searching for this elusive potion.”

Ancient legend speaks of an island deep in the South Pacific, which, according to common folklore, is called Baralaku. The place is said to be masked by huge waves and is so mysterious that even the Polynesians themselves fear it and believe that it’s guarded by evil spirits. The island is supposedly a tropical paradise unparalleled in the world and described in ancient literature as, ‘not known to man and surpassing all other islands both in terms of beauty and fertility’. The island is said to contain a treasure, not of gold or jewels, but a prized glass drinking vessel containing a mythical concoction rumored to have been drunk by Poseidon himself. 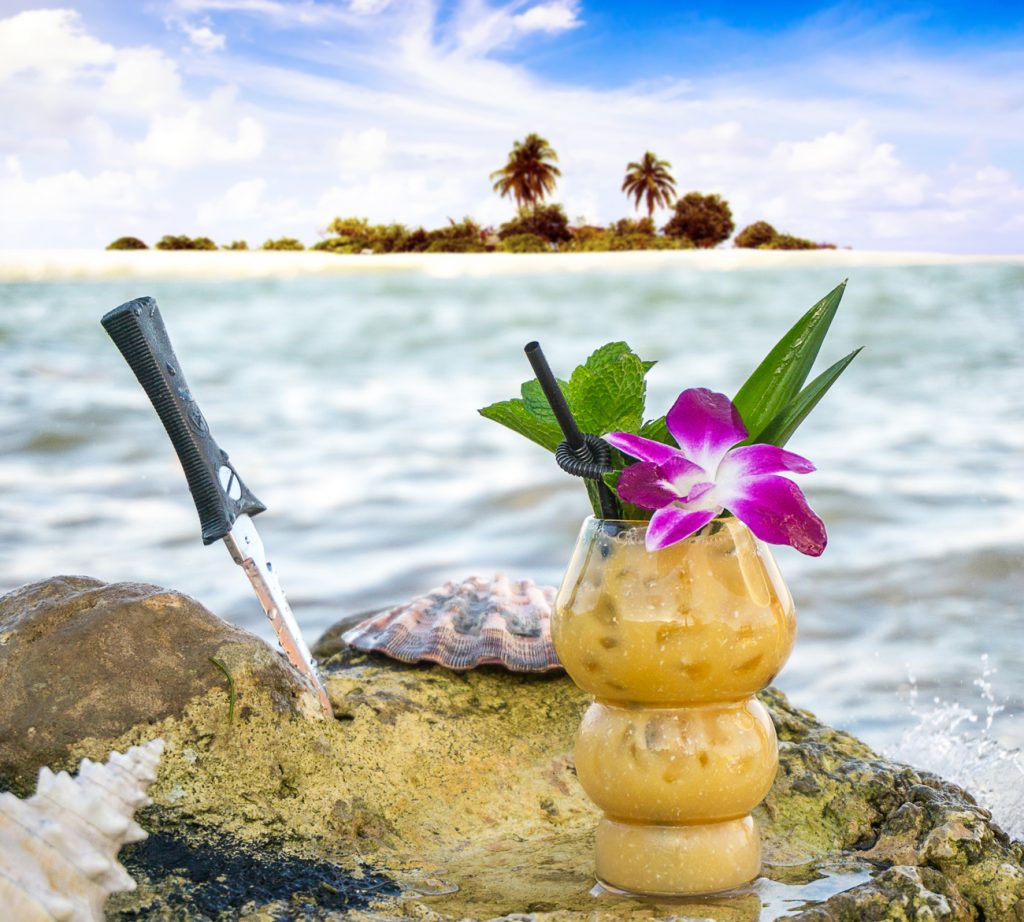 The mysterious island of Baralaku believed to be hidden deep in the South Pacific.

Archaeological data and satellite imagery shows that the island may have been inhabited during Roman times. In recent years, a Roman ship was recovered – we know from the earliest explorations by experts that the ship was carrying glass vessels of dried fruit and dates back to the first century AD.

The discovery of wrecks of cargo ships in the area suggest that the island was at the center of an intense trade in the South Pacific and the presence of so many shipwrecks in the area supports the validity of the proposed etymology by which Baralaku was called “Hidden Island” because of the danger of the many rocks rising from its waters. In Roman times, Baralaku may have been used as a military outpost and for trade; later, in medieval and modern times, the island was reputed to be an outpost of Arab Piracy in the South Pacific. 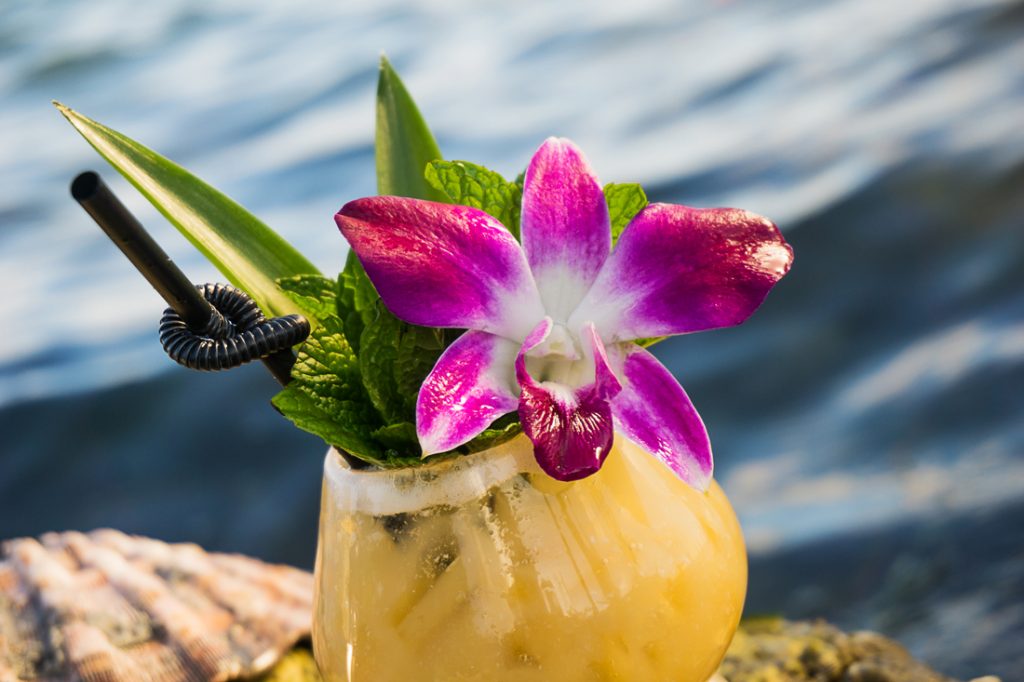 The hidden underwater islands surrounding ‘Baralaku’ are said to be in large numbers, many of them can be defined as simply rocks above the water, located close to each other, and they are called “Ants,” a name that indicates their outstanding number. Every twenty years, on the twentieth day, for 2 hours, the glass vessel is said to emerge on one of these rocks and bask in the sunlight, waiting to be discovered.

According to the ancients, the glass vessel only becomes visible on the twentieth day, every twenty years for a period of only two hours – always at low tide and when the sun is the highest in the sky. 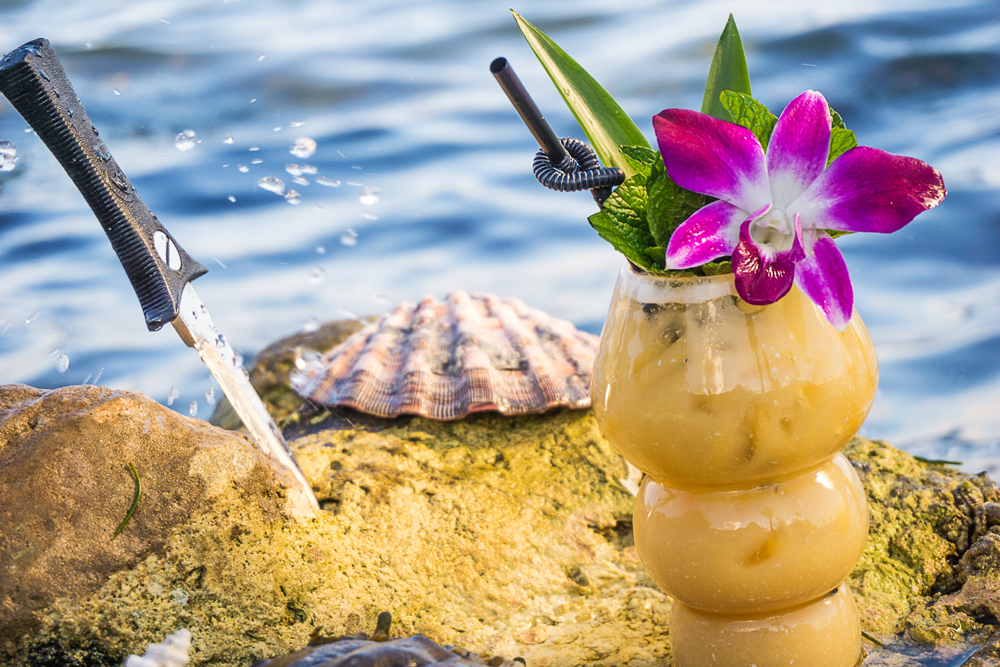 Recreated here by Drunken Tiki, this precious treasure has been sought by ancient mariners for over four hundred years. Drunken Tiki is proud to present to you our version of this precious and rare treasure for the first time. Using tropical flavors indicative of classic-era Tiki and blending them with modern spirits, we have come up with a worthy concoction that lives up to its ambiguous name. 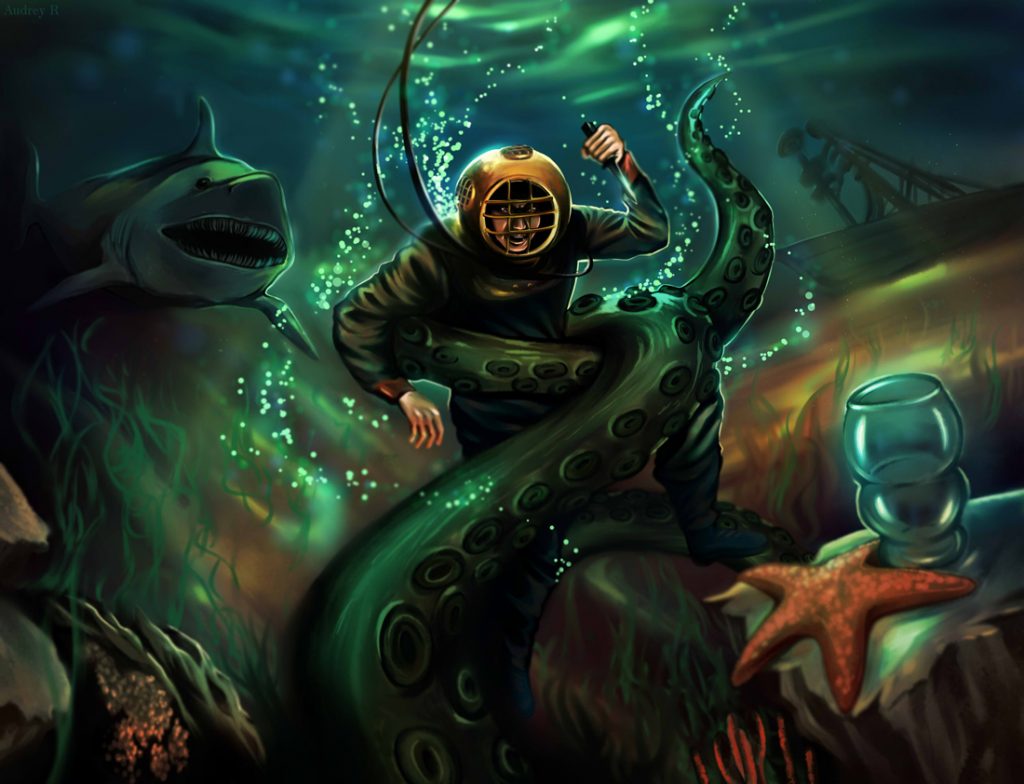 Drunken Tiki has taken great care and developed a recipe which will serve as a homage to the mythical drink, however, the recipe itself will remain a closely guarded secret. What we can guarantee is that the drink will be so potent that it will leave drinkers with a minimal amount of “up time” – as such, we are strictly limiting the concoction to one per-person. 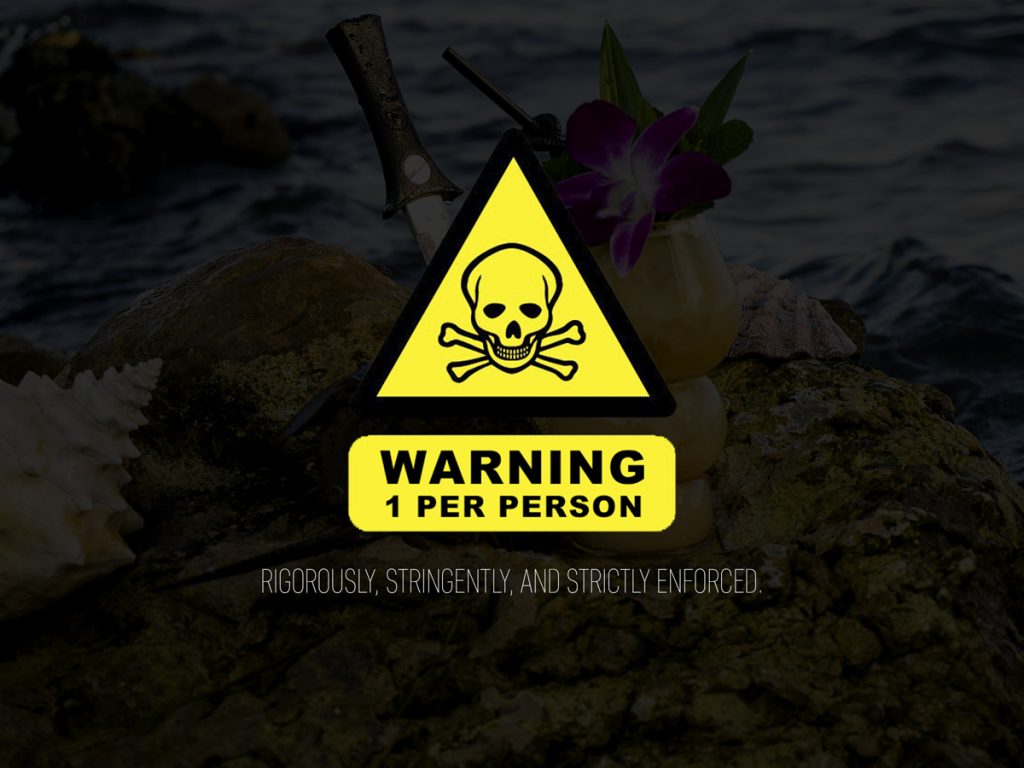 Drinker discretion is advised. Upon experiencing the drink’s strong flavor, a dizzying sensation may be experienced by drinkers not used to concoctions with overproof spirits and mind-altering profiles. As such, it would be wise to locate the coroner before serving this drink. 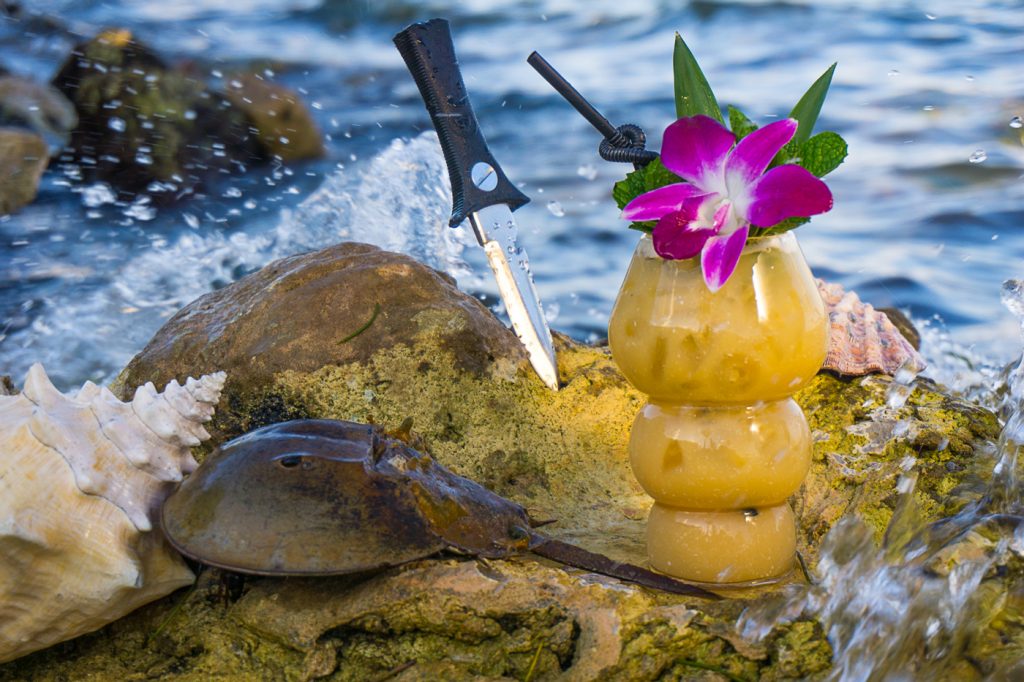 Disappearing again back into the depths of the unknown for another twenty years.

For inquiries, please e-mail info@drunkentiki.com with #deepdarksecret in the subject header. Include a brief synopsis of your organization and how you’d like to collaborate.